The Bell Tower stands in the south-west corner of the Inner Ward. It was built in the 13th century and is so-called because of the belfry on top. 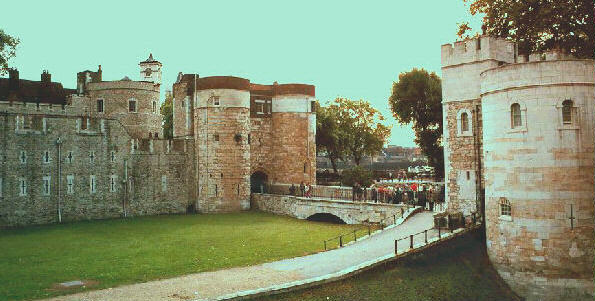 Visitors pass through the Middle Tower (at right), cross causeway over moat (grass area), and then enter through the Byward Tower (middle of photograph with two tubular structures at each end.) Behind and to the left of the Byward Tower, the Bell Tower can be viewed (round building with white belfry appearing at its uppermost right). At left, the fortress’s Outer Wall adjoins the Byward Tower. [R.Pierce]

In the past, when the bell was rung in alarm, drawbridges were raised, portcullises were dropped, and gates shut. The bell is still rung in the evening to warn visitors on the wharf it is time to leave.

Among the most famous prisoners confined to the Bell Tower was Sir Thomas More imprisoned there in 1534.

More, at one time close friends with Henry VIII, refused to acknowledge the validity of the king’s divorce from Queen Catherine of Aragon (thereby refusing to accept the Act of Succession) and to acknowledge him as supreme head of the Church. Catherine, it should be noted, was the daughter of Isabella and Ferdinand of Spain, known for financing the expeditions of Christopher Columbus.

More was executed in July 1535 and buried in St Peters Chapel.

Henry VIII’s penchant for imprisoning family was not lost on his children apparently. This involved two of his daughters (by two different mothers), both of whom would one day rule. Princess Elizabeth, later Elizabeth I, was also imprisoned in the Bell Tower — sent there in 1554 by her half-sister Mary I on suspicion of being concerned in plots against the throne.

Previous <= The Byward Tower and The Outer Ward

Next => The Yeoman Warders 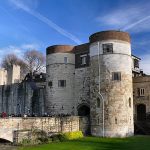 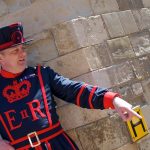