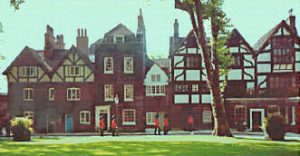 There was a huge fire long ago, which was called the Great Fire of London, and a lot of the houses in the city of London were burned because they were largely made of wood. Because the Queen’s House was inside the stone walls of the Tower of London, it was saved. That makes it the only surviving house of that style from that time!

But wait! There are more interesting things about this house and history … If you live in England you will know the very famous story of Guy Fawkes. For those of you who live elsewhere, Guy Fawkes was a man who tried to blow up the English Houses of Parliament. Imagine that!

He and some of his friends decided to dig a tunnel under Parliament, which is where the laws are made in England. They rolled barrels of gunpowder into the basement and stacked them there. They planned to set off the barrels of gunpowder on November 5th. However, Just before it was time to light the fuses to the gunpowder the plot was discovered.

Guy Fawkes was captured and taken to the Tower of London as a prisoner. At the Tower — in fact in a hall known as the Council Chamber inside of the Queen’s House — he was made to confess that he was going to blow up Parliament, and he told them the names of all the other people who had helped him.

Now, every November 5th Guy Fawkes Day is celebrated in England. Boys and girls get an old suit or maybe an old pair of dads pants and an old jacket, and stuff it with straw to make a straw figure that looks like Guy Fawkes. If they can get a hat they put that on too. This figure is called a Guy. It’s something like a scarecrow. The children then put the guy in a wooden cart and take him door to door asking people for “A penny for the Guy please.”

When they have collected enough pennies they go and buy fireworks … rockets, and sparklers and bangers. As soon as it gets dark everyone, children and adults, build a huge bonfire with wood and sticks, and they throw the straw Guy on it and set the bonfire alight. As the straw Guy burns up fireworks are set off and everyone chants a rhyme:

Please to remember
The 5th of November
Gunpowder, treason, and plot
We know of no reason
Why gunpowder treason
Should ever be forgot.