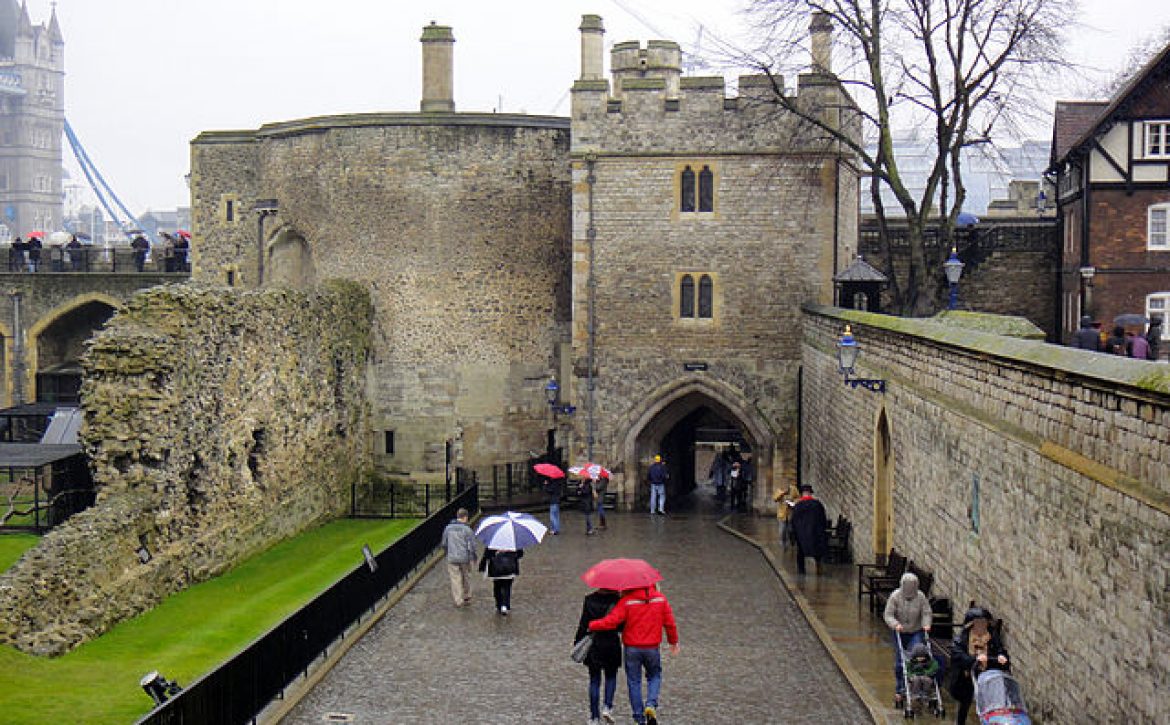 Originally this was known as the Garden Tower for the constable’s garden that was by it. The square-shaped structure at one time served as a gateway to the Inner Ward. Its lowest level was built by Henry III and the other storeys were added later. It gained its present name in the 16th century because of the murderous deeds which took place in its dark rooms.

The most notorious deed was the killing of the princes, Edward V and his younger brother Richard, Duke of York. This occurred in 1483 supposedly on the orders of the Duke of Gloucester, afterward Richard III, but there are some who strongly oppose this view and name Henry Tudor, later Henry VII as the culprit.

The generally accepted version of the murder is that Elizabeth Woodville, widow of Edward IV, was forced to allow her sons to live in the Tower, ostensibly to enable the 13-year-old king to prepare for his coronation. Sir Robert Brackenbury was asked to take part in the murder but refused to help.

Thereupon Sir James Tyrrell was sent to the Tower with orders to force the Constable to surrender his keys for one night. Sir James agents found the two boys asleep. One was suffocated with a pillow while the other boy was stabbed to death. The murderers carried the bodies down the narrow stairway and buried them under a covering of rubble in the basement. They were later reburied by Sir Robert Brackenbury close to the White Tower, but all knowledge of the graves was lost. In 1674 skeletons of two boys were unearthed near the White Tower, and in the belief that the grave of the princes had been found the king ordered the bodies to be moved to Westminster Abbey. 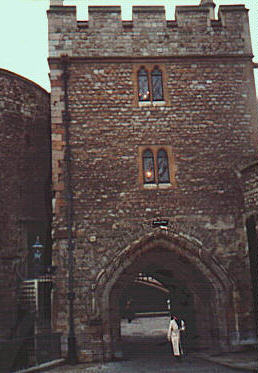 With lights in its windows and darkness approaching, the Bloody Tower appears appropriately haunting. [Susan Harding]

Many other figures in history suffered imprisonment or death in the Bloody Tower. Archbishop Cranmer and Bishops Ridley and Latimer who were condemned to death for heresy in 1555, were imprisoned in the Tower before being burned at the stake at Oxford.

Henry Percy died there in mysterious circumstances in 1585. The infamous Judge Jeffreys was a prisoner here as well. Sir Thomas Overbury, poet, and courtier, was a victim of court intrigue. His food is supposed to have been poisoned, and he is supposed to have swallowed enough poison to have killed 20 men before he died in 1613.

Tudor writing desk in the Bloody Tower at the Tower of London. The room is set out as it might well have been when Sir Walter Raleigh was imprisoned there. [Martinvl]

Sir Walter Raleigh spent most of his 13 years of imprisonment in the Bloody Tower, but he was able to perform many scientific experiments. He is credited with having discovered a method of distilling freshwater from saltwater. Also during his imprisonment, he wrote his vast History of the World which was published in 1614, four years before he was beheaded at Westminster.