The Crown Jewels are what most visitors to the Tower of London come to see. This incomparable collection of crowns, orbs, swords, sceptres and other regalia, and gold and silver plate was refashioned in 1661 after parliament had ordered the original gold and precious metals to be melted down for coinage in 1649.

The Imperial State Crown worn by monarchs at their coronations is set with jewels of great antiquity and historical significance. The oldest is Edward the Confessor’s sapphire, believed to have been worn by him in a ring and now mounted in the cross patee above the monde. The great gem above the rim is the ancient balas-ruby, known as the Black Prince’s ruby, which is said to have been given to him by Pedro the Cruel of Castile.

From the intersections of the arches hang four superb drop pearls, the so-called Queen Elizabeth’s Ear-rings, but there is no evidence that she ever wore them in this way. Set in the rim at the back of the crown is the Stuart sapphire. It is probably much older than its name implies but is known to have been in the possession of James II when he fled to France after his deposition. It was formerly mounted in the rim, at the front, but was displaced by the Second Star of Africa cut from the Cullinan diamond. In addition to these jewels, the Imperial State Crown contains over 3,000 diamonds and pearls, as well as fine sapphires, emeralds, and rubies. 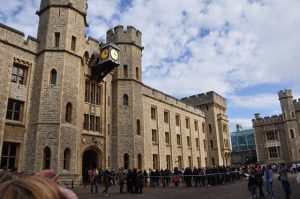 The Crown Jewels have in the past resided in both the White Tower and in the Martin Tower. Today they have their home in Jewel House which is a part of the Waterloo Barracks

The Royal Sceptre with the Cross is a rod of chased gold, with the peerless Star of Africa cut from the Cullinnan diamond held in a heart-shaped mount. Above this is a superb amethyst with a diamond-encrusted cross set with an emerald.

Queen Elizabeth the Queen Mother’s Crown was made for her coronation as queen consort in 1937. This graceful crown is set with diamonds, dominated by the famous Koh-i-noor. Its Indian name means “Mountain of Light” and the jewel has a long and turbulent history. Tradition says that its male owners will suffer misfortune, but women who possess it will rule the world.

Next => The Martin Tower