Built by Henry III this tower is famous as the scene of Colonel Thomas Bloods fruitless attempt to steal the Crown Jewels. After the Restoration, the newly-made regalia was kept in the Martin Tower (known at the time as the Jewel Tower) in sole custody of the Deputy Keeper of the Jewels, a man named Talbot Edwards who lived with his family in the tower.

Blood, disguised as a clergyman, became very friendly with Edwards, even to the point of proposing a marriage between the old mans’ daughter and a supposed nephew of his. Early on a May morning in 1671, the colonel appeared by appointment with his “nephew” and a friend to arrange the marriage. While awaiting the ladies, Blood suggested that his friends might see the Crown Jewels. As soon as the chamber was opened Edwards was attacked and badly injured. Blood hid the State Crown beneath his cloak; one accomplice slipped the Orb into his breeches, while the other began filing the sceptre in half to make it more portable. They were then unexpectedly disturbed by Edward’s son returning from abroad and a running fight followed during which all three were captured. 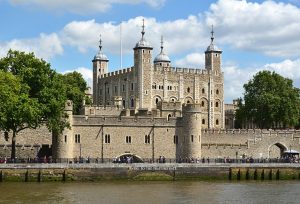 The Outer Wall seen from outside the complex shows the rarely viewed backend of the Tower; notice the cross-shaped “loopholes” in the fortress walls for weapons. The two round buildings beyond are believed to be: Bowyer Tower at left and Flint Tower at right.

Blood eventually obtained an audience with Charles II to whom he remarked that “it was a gallant attempt.” Charles — with uncharacteristic leniency — immediately pardoned Blood, granted him a pension and promised that his Irish estates, seized at the Restoration, would be restored.

Edwards, on the other hand, was granted 200 pounds by the Exchequer and his son was given 100 pounds. The old man, however, was forced to sell off his expectation for half its value, and he died of his injuries soon afterwards.

Next => The Salt Tower 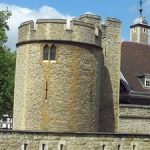 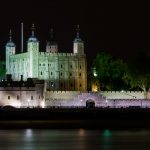