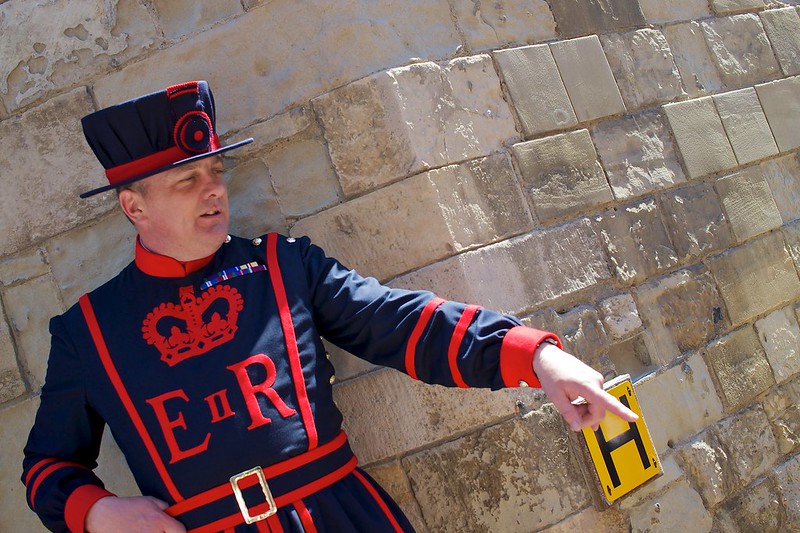 One of the most popular Tower attractions involves people: the Yeoman Warders to be exact. They were originally established in 1485 as King Henry VIII’s bodyguard. They are perhaps best known for their gorgeous scarlet and gold dress uniforms which date to 1552 and are worn on state occasions. They are usually seen at the Tower in the blue undress uniform granted to them by Queen Victoria in 1858.

Yeoman Warder at the Tower of London [Flickr: Paul Hudson]

The Yeomen Warders, also known as the beefeaters, are armed with a haberd or pike known as a partisan. The Chief Warder carries a staff surmounted by a silver model of the White Tower, while his second-in-command, the Yeoman Gaoler, possesses a ceremonial axe.

According to The London Encyclopedia, the popular name beefeaters may have been derived from their fondness for roast beef; however, it has also been suggested that it comes from the French buffetier. Moreover, the term may originally have been derogatory, used by the lower classes in sneering at the “pampered guards” who regularly ate beef, while they rarely had any. 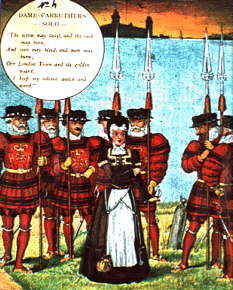 An illustration from a turn-of-the-century playbook of Gilbert & Sullivan’s Yeoman of the Guard: beefeaters give way as a scrubbery maid passes through. Notice the partisans they are carrying and the silhouetted image of the White Tower at the top.